Too Many Coolers on a Camping Trip? 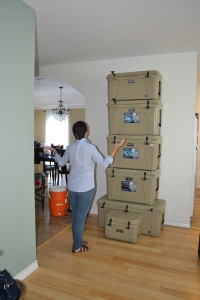 Welllllll… the Deerslayer’s wife would’ve said, “Yup!”  I would’ve drawn the line at the 6 other Igloo coolers that we already own.  But these are Yeti coolers!  And they’re made in TEXAS.  Talk to any hunter about coolers and a distinct reverence is suddenly detected.  Mention Yeti coolers and hunters begin to cast their eyes down and genuflect.

I’d heard the talk, detected the reverence so I knew what my Deerslayer would get for Christmas a couple of years ago.  I gotta tell ya, I really thought it would be just another cooler, a really upper-end cooler, but another cooler just the same.  I hate to admit that even I now share the respect for these coolers.  After years of melted ice, and lukewarm, waterlogged foods I was amazed by what the Yeti coolers can do.  They keep frozen foods frozen for days, all the way to Wyoming from South Texas and several days after that as a matter of fact!  Now, this entry was not intended to provide advertising for the Yeti company. However, when I find an amazing product that can so dramatically improve a hunting/camping experience, I’d be remiss not to share with my readers. While the Yeti coolers are pretty pricey, they really are worth a look at www.yeticoolers.com. 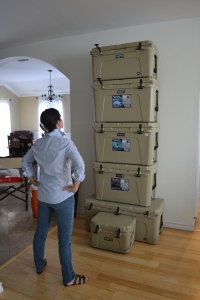 It’s already been definitively determined that there is no such thing as too much bacon for any camping and/or hunting trip.  And while I haven’t discussed the fact, neither can there be too many enchiladas, gallons of beans or pico de gallo, pounds of fajitas or brisket or potato salad, (or Prosecco or beer)!  Our recent trip to Wyoming was for 40+ people who were extremely appreciative of my cooking, availability and willingness to prepare fresh percolated coffee, and my willingness to make pancakes for the many teenaged family members in the mornings.

While most camping trips won’t need to accommodate this many people, over the years, the Deerslayer and I have honed the art of safe food transport. I have to admit that we used every one of the coolers in the picture. There are several tricks we’ve learned over the years that really make a difference when keeping packed food cold and/or frozen.  Before a camping trip, we fill gallon jugs with water and freeze them.  The frozen jugs are then used to “pre-chill” the coolers prior to packing.  Starting with a pre-chilled cooler is worth the extra time.  The jug can also be placed with refrigerated foods so that they don’t end up sitting in water.  It’s always important to plan which foods will be prepared first.  Those items should be packed together so that coolers aren’t opened unnecessarily.  This year, we tried something new; we labeled the coolers so that we knew what was where, which prevented unnecessary loss of cold while rummaging through coolers.  This worked really well.

The frozen fajitas and brisket were prepacked and vacuum sealed. They weren’t needed during the first few days of the trip and so were packaged together. Once the dry ice was added, there was no need to open the cooler again except to check the contents once or twice before thawing.

It saved so much time knowing what was in each cooler. 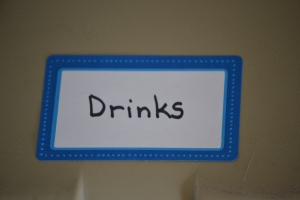 I’m sure you’re getting the idea by now.

Two of the middle coolers, called “105’s” held all the frozen food we needed for 4 meals for 40 people. In a previous post, I mentioned that I freeze foods like beans and carne guisada flattened in one-gallon zip bags so they stack easily.   I added one block of dry ice, wrapped in a paper sack and kitchen towel to each cooler.  The bottom cooler  (a 125) held a week’s worth of iced beverages for four people.  The others held all of our refrigerated foods.  We used every single one and they performed amazingly.

Just an added note on how strongly the hunters feel about their Yeti coolers:  The Deerslayer’s sister and her spouse were recently on a trip to Italy.  Spouse received a text message (in Italy) that he shared. “Mike got a Yeti!”

10 responses to “Too Many Coolers on a Camping Trip?”