Posted on January 17, 2015 by thedeerslayerswife

Deerslayer had a delicious meal in Vail a while ago that he was excited for me to research and try to replicate.  He was so enthusiastic (and cute) that I couldn’t  say, “no”.   The dish was Osso Buco (which means bone with a hole) and is traditionally made with cross-cut veal shank that is then braised in a savory mix of veggies, tomatoes, and wine. If a hunter decides to prepare this recipe with wild game, keep in mind that venison shanks are pretty puny for this particular application.  The shanks need to be decently large and meaty like might be found on an elk, bear, wild pig, moose, or NILGAI!

Since we don’t purchase meat from a grocer, how fortuitous that we recently acquired some very nice nilgai shanks as part of the reward of  a successful hunt.  As I began to scour the blog world for wild game versions of this recipe, I found posts dealing with bear, moose, and elk. I was thrilled to stumble across Hank Shaw’s Hunter-Angler-Gardener-Cook. There’s some pretty powerful stuff in the wild game cookery department on his website.  I’m pretty sure I’ve found my new wild game cooking bible.  His books are definitely on my birthday wish list!  I ultimately ended up preparing a version of his recipe.

Deerslayer and I also needed info on the best way to cut the shanks so that we’d end up with the clean cross-cut slabs.  We wanted them to be about 2 to 2½ inch sections. The meat was slippery and difficult to hold on the cutting board because of the fascia (silverskin).

Of course, having the proper tools for the job makes everything much easier.  Since we didn’t have a butcher’s meat band saw, we tackled the problem by wrapping both ends of the semi-frozen shank with clean kitchen towels on either side of the cutting line.  Laying the towel-wrapped shank on the cutting board, (and having me hold one end) Deerslayer was able to use an LEM hand-operated meat  saw without the meat sliding all over.  We ended up with 4 servings per shank.

*This recipe is for about 4 large shank servings or 5 small ones.  We went crazy and prepared two whole shanks (8 servings or 2 large dutch ovens’ worth!)

1 large wild game shank (about 4 servings, cut into 2-2½ cross slices) one per person

around 2 cups crimini mushrooms, sliced (or others that you like)

Cooking time is about 3 hours depending on the size of the shanks and amount of sinew.  The nilgai took every bit of the 3 hours.

Tie up the shanks so the meat doesn’t fall off the bone during cooking.  It provides a nicer presentation. 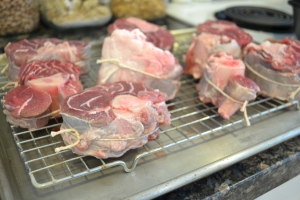 Add oil to a cast iron dutch oven and heat.  Brown meat on all sides and remove from heat.

Add carrots, celery, onion, and mushrooms to the pot.  Season with salt and pepper. Saute until beginning to brown. 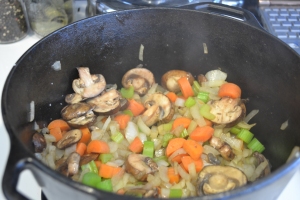 Add wine, stock, tomatoes, spices, and bay leaves.  Bring to a boil.  Stir up browned bits from the bottom.

Add meat back into dutch oven.  Cover with sauce.  Reduce to a simmer.

Place a lid on the pot and put the whole thing in the oven for about 3 hours.

Check after a couple of hours to see if meat is getting tender.

Serve over risotto, polenta, orzo or other worthy bed.  Sprinkle with chopped parsley.

This would be perfect for Valentine’s Day!

← The Perfect Gift
Take a Quick Breather When You Can →

One Comment on “Wild Game Osso Buco (Means “I Love You!”)”