Posted on September 20, 2015 by thedeerslayerswife 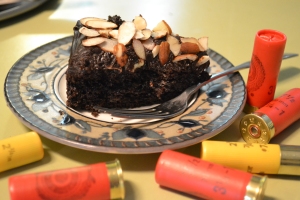 You may be wondering what whitewing season has to do with chocolate cake.  If you bear with me for a few minutes, not only will the connection become clear, but you’ll end up with a fabulous chocolate cake recipe as well.

Preparations had begun for the first big whitewing dove hunt of the season. Members of the Deerslayer (hopefully whitewing slayer) Clan would soon be converging on the southernmost part of Texas where the hunt would take place. All the accouterments necessary for the big weekend began to pile up in the front hallway; Yeti coolers, folding chairs, shotguns, gun cases, boxes of shells, shooting vests, all varieties of khaki and camo attire, boots and muck boots, plenty of thirst-quenching beverages, shears.  The pile grew and grew.  I could no longer get to the laundry room.

As the pile began to encroach on the surrounding environs, the Deerslayer’s wife developed an ever-so-slight twitch. The twitch was accompanied by a bout of crankiness. Don’t get me wrong, my mantra is “Go with the flow, embrace the moment.”  However, I also like a tidy house.  I’m guessing that the extensive paraphernalia that is part and parcel with the hunting way of life might be one aspect that makes a deerslayer’s wife wince. However, it’s important to remember that the planning and preparation are part of the thrill of it all. It was time for me to step back, take a deep breath, regroup…. and bake a nice chocolate cake for the hunters to take with them. A small, thoughtful gesture like that can bring a tear of gratitude to any hunter’s eye.  And it provided me with a creative outlet on which to refocus my energies. 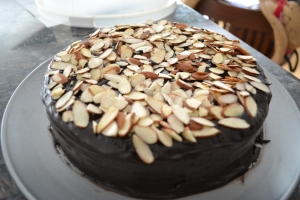 I discovered a great recipe on the King Arthur Flour website a few weeks ago when I was scouring the internet for a chocolate birthday cake for one of the Junior Deerslayers. Cake Pan Cake was just what I was looking for.  While I love to cook all sorts of wild game, baking has never been my forte.  This recipe is just what I needed; rich, moist, chocolaty, and EASY!  This fabulous cake was well received  It even has a backstory; hearkening back to WWII and the days of rationing.  The original recipe has no dairy or eggs and is supposed to be mixed together in the baking pan. Check out the website for the original recipe and its history.

I adapted the original recipe a bit and the results were delicious.

Preheat oven to 350 degrees. I used two 9″ round pans and sprayed them with baking spray with flour.

Combine all dry ingredients in a bowl. Stir around with a fork until mixed.

In a two cup measure, combine all liquid ingredients. Pour into dry ingredients and stir until well mixed.

Divide mixture equally into two round pans. It will barely cover the bottom of the pans. 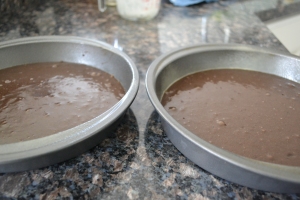 Bake for approximately 20 minutes (less than the time listed on the original recipe since I divided the batter into two pans).

Check for doneness around 20 minutes.  All ovens differ.  Remove pans from oven and cool on a rack.When cool, smear as much raspberry jam as your heart desires atop one of the layers. Place the top layer where it goes (on top). Frost the cake, lick the spatula. Sprinkle with slivered almonds. Eat some. Sneak some more frosting. Enjoy.

This post is dedicated to my favorite chocoholic fiends: Junior Deerslayer and Kelly!