Waste Not Want Not

I’ve said before that, when it comes to hunting, it’s important to me to use as much of a harvested animal as possible. While my part in the hunting process is limited to preparation of the meat, I feel strongly about not having any waste.  If an animal is harvested, we should use every bit.   My recipes reflect this philosophy as much as my family’s choice to process our own meat, making use of every possible cut.

Previously, I’ve shared my recipe for bacon-wrapped garlic venison roast.  It’s a favorite with my family.  Often, we will have leftovers.  I created the following recipe to use any leftover slices of roast. The slices should be rare to medium rare.  Any end bits are too overcooked for this sandwich recipe and can be thrown into a zip bag and frozen for later use in soup, stew, or pot pie

*On a separate note, it has been brought to my attention by an unnamed junior deerslayer that sometimes my recipes have not photographed as appetizingly as they are in real life.  Apparently, I will be editing some of my previous posts (this one, included) by producing some more visually-appealing photos.  Stay tuned. 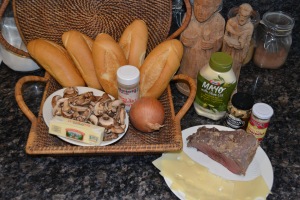 Thinly sliced venison (leftover from a roast), nice and rare

Thinly sliced Swiss or cheddar cheese (enough for each sandwich)

(You may notice that there is no avocado in the photo.  I make no excuses.  Sorry, I forgot.)

2.  Sauté onions in butter in a cast iron skillet until caramelized.  Season with Salt &    Pepper mix.

3.  Because I have a junior deerslayer who isn’t a devotee of onions, I set the onions aside in a bowl while the mushrooms sauté in the same pan.  Apparently, it’s okay for the mushrooms to benefit from the flavor of the onions as long as ne’er the two shall meet.  If you’re okay with sauteed onions WITH the mushrooms, the mushrooms can be added to the caramelizing onions in the skillet.

4.  Slice bolillos in half. Place, cut side down,  on a hot, well-buttered griddle.  Smear around to coat cut edge with butter and toast until nicely browned.

5.  Assemble the sandwiches.  Start with mustard or horseradish/mayo spread.  Top with venison, sautéed onion (if you can stand it), mushrooms, avocado, and a slice of cheese.

Posted by thedeerslayerswife on April 4, 2013 in camping, Hunting, Recipes, Venison