Posted on May 28, 2013 by thedeerslayerswife

First of all, it just occurred to the Deerslayer family that, in South Texas, whitewing season will commence in three and a half short months.    With that in mind, it was safe for me to baby my Deerslayer with his favorite meal of Cook- All Day Whitewing With Rich Gravy” and the obligatory white rice and LeSueur peas. Although the recipe is time-consuming, the result is totally worth it for the devotee.  The meat is succulent and falls off the bone.  The gravy is rich and flavorful.

It was greatly appreciated.  As usual, however, we had about a half dozen birds left over. We usually just reheat the birds, make a new batch of rice and dig in. But I had a new idea for the leftovers that was inspired by a recipe that the female Deerslayers recently enjoyed at a local restaurant!

We knew our starting point; roasted poblanos and roasted corn.  There were carrots and potatoes, chicken (which I knew I could substitute with whitewing instead!) and a creamy base.  Now to put it all together. 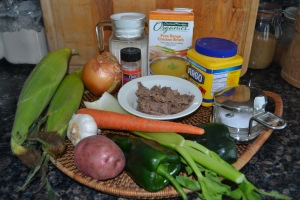 2 roasted ears of corn, cut from the cob

1/2 cup cream or half and half

1. On a cookie sheet, arrange poblano peppers and two ears of shucked corn, silks removed.  Set oven to “high” broiler setting.  Place cookie sheet on highest rack in oven, about 10 inches from the heating element. Watch closely.  As poblanos begin to blister and corn browns, use tongs to turn each until all sides of poblanos are blistered and corn is browned on all sides.  Remove from broiler.

Place poblanos in a bowl, cover with plastic, and allow to steam for 20 minutes.

Once roasted corn is cooled, cut from the cob and set aside.

2. Saute’ onion and garlic in corn oil in a high-sided cast iron skillet. 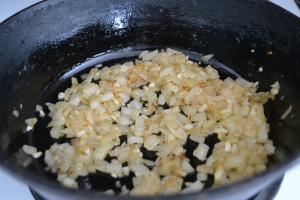 *Now some may disagree with this next step, but don’t knock it ’til you’ve tried it.  I like to use corn oil that has previously been used to soften corn tortillas for enchiladas or for frying corn tortillas for homemade tortilla chips.  The oil takes on a fabulous flavor that works beautifully when frying rice, or sauteing onions and garlic for this recipe. Waste not, want not, I always say!

3.  Add all veggies (except for roasted corn and poblanos) to onion and garlic, saute for a couple of minutes, then add 2 cups of the stock, chili powder, comino, salt, and pepper.  Simmer until veggies are soft.

4.  With a slotted spoon, remove veggies to a blender.  Add chopped poblanos, last cup of stock and 1/2 cup of cream.  You’ll probably need to do this in two batches.

5.  Pour blended contents back into skillet.  Add diced whitewing (or chicken) and half of the corn. Heat through. 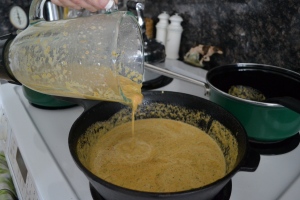