A First! An Axis Buck!

Posted on January 7, 2017 by thedeerslayerswife

I’ve seen axis deer for years on drives through the Texas Hill Country.  Usually, they’re behind  the high fences of hunting ranches.  Sometimes they’re dead on the side of the road, having escaped from one of those ranches and not having kept up with the rules of the road.

They’re beautiful animals originally from India, fully spotted with long, three-pronged antlers. They were brought here to be hunted as exotics.  Slightly larger than whitetails with beautiful spotted coats like a fawn, they were first brought to Texas in the 1930s to keep on game ranches.  Because they’re exotics, they can be hunted any time during the year, not just during hunting season.

Deerslayer and I had heard, through the years, that axis is a preferred game meat because of its mild “non-gamey” taste.  I’ve always said that game that is properly processed and prepared beautifully doesn’t taste gamey.  But my curiosity was certainly piqued regarding axis deer.

Even though Deerslayer has hunted since he was a kid, he’d never had an opportunity to bag one….. UNTIL NOW!  An opportunity presented itself for Deerslayer to harvest his first Axis.  We were both really excited.  The buck was a little larger than a whitetail.  The skin was gorgeous.  I asked Deerslayer to save it for me. 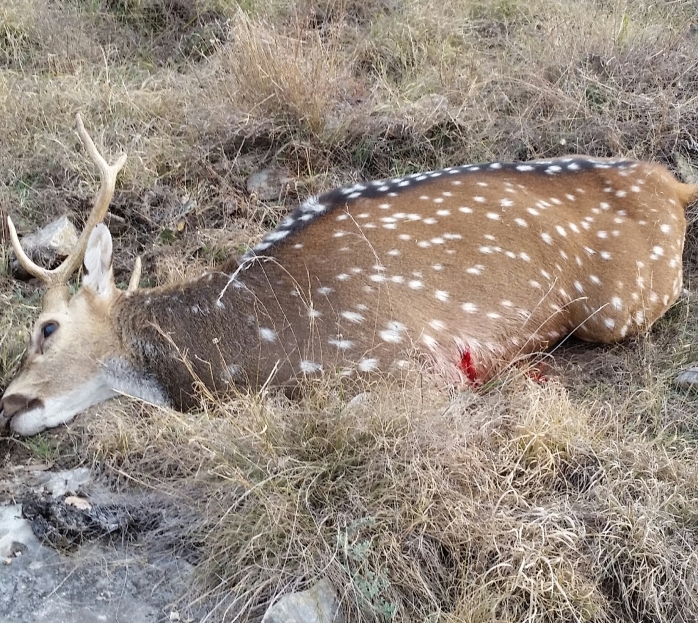 Being the Deerslayer’s Wife, I was so excited to try out the meat. It had quite a reputation. And after all, this is what I do.  As I use the meat for all my favorite recipes, such as Venison Parmesan, Pecan Crusted Venison Steaks, Seared Tenderloins or Backstrap, Bacon-Wrapped Garlic Football Roast, and all the others, I’ll share with my readers my findings regarding any differences that I discover between the axis and whitetail.

The first night that we brought it home and processed it, I noticed the gorgeous deep, rich mahogany color of the meat, deeper in color than whitetail.  There was also more fat on it than what I was used to seeing on whitetail.  In the Deerslayer household, we don’t really care for fat  that some whitetail have.  It kinda coats the inside of your mouth and doesn’t seem to add good flavor to the meat.  For the sake of experimentation, we decided to grill the tenderloins of the axis, one trimmed of fat and the other with the fat left on. 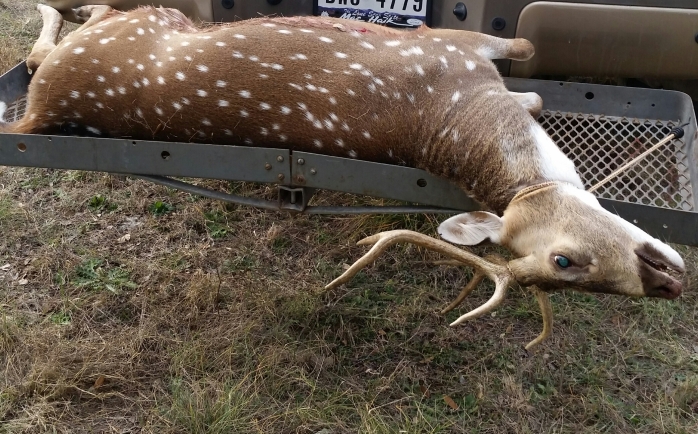 It was the consensus of the family that both tenderloins, seared to a glorious medium-rare were as good as, if not better than, whitetail.  The tenderloin that had the fat left intact was as flavorful as can be. There was no unpleasant after-taste or mouth-feel.  I’ll continue to compare and share.  I’ll keep you posted.

← Christmas Decor for the Discerning Deerslayer
Our Own Ranch →