Posted on August 8, 2017 by thedeerslayerswife 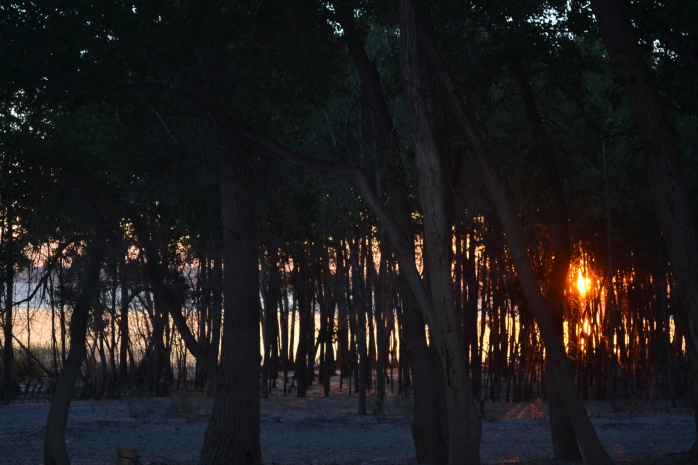 Everybody who camps has experienced the mishaps and horror stories that make us rethink ever heading out again on the open road.  These are the stories that are told for years with chuckles, shudders, rolling of eyes and gentle cursing.

Here’s my story…. for this year.

Each summer, for as long as I can remember, my family has headed up to Glendo, Wyoming for a convergence of the Deerslayer clan and various assorted friends and kids for a two-week long camping trip that includes boating, swimming, eating, napping and more eating.  I always look forward to this trip with much anticipation.

People come from Nevada, Colorado, Texas, and as far away as Alabama. Families take turns feeding the whole group.  I enjoy this part the most.  I usually prepare meals at home, freeze them and transport them in our Yeti coolers with dry ice.

The preparation for the trip takes weeks.  It requires lots of lists.  I love lists because they are a way to document what I’ve accomplished.  There’s a check-list to get the camper ready to make the long journey from South Texas to Wyoming.  It’s a two-day trip.  The truck has to be checked out, dieseled up, and tires and pressures checked.  The camper has to be packed with food and beverages for the duration, clothing, and magazines for reading in the shade of the cottonwood trees.

This trip was planned down to the last detail. We hitched up the camper and headed back in the house for a final cool shower before we headed off. It was over 100 degrees out!  Everyone grabbed their small overnight bags and jumped in the truck for the first leg of our long journey.

Except me.  I was so proud of myself for doing everything on my all my lists.  I was freshly showered and ready to camp like a boss.  About an hour down the road, however, I discovered that I hadn’t grabbed MY overnight bag, the bag that had ALL my toiletries in it, my necessities!  My magazines and laptop! In my haste, I set the bag on the sofa to grab something else and walked out without it.   My eyes welled up.  I stammered, whimpering.  How could I forget my own bag when I spent so much time making sure that everything and everyone else was ready to go?  It threw me for a loop. I knew we couldn’t go back. 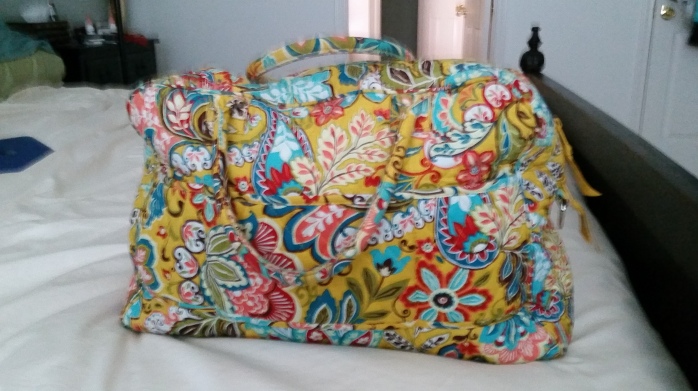 It took a while for me to regain my composure enough to get back in my camping frame of mind.  No sweat, I could swing into a WalMart to pick up whatever I needed to have an enjoyable trip.  And I did.  Bright and early the next morning, I scampered into the store and purchased my bare necessities.  $45 later, I had everything I needed, except for a nice cup of coffee.  I dashed into the conveniently located McDonald’s at the entrance of the WalMart.  Victoriously, I sauntered back to the truck and we headed off… WITHOUT MY CREDIT CARD.  Luckily we weren’t too far down the road when I realized it.  I called the credit card company, put a hold on my card, and called McDonald’s.  Yes, they had my card and would hold it until I got back to retrieve it, which I did.

All was well until we got about 20 miles south of Lubbock, TX. 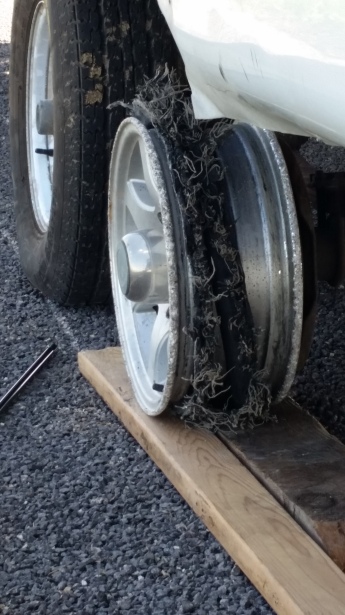 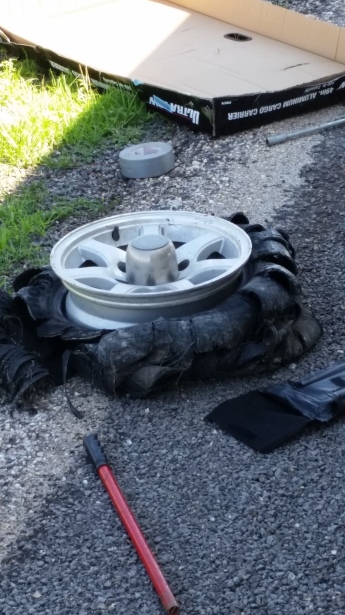 A double blow out!  One rim was shot and the skirting was torn off the side of the camper.  It was 4 o’clock in the afternoon and the next day was Sunday.  Most tire shops would be closed.  We unhitched the camper and Deerslayer headed for town.  He arrived at the tire shop as they were closing.  They stayed open to honor our warranty and sell him two new tires and rims.  He replaced the tires and we were on our way…

until the axle broke.  Deerslayer had to remove the tire (on the other side of the camper) and leave the axle dangling like a severed limb as we located a campground with a pull-thru opening and creep over at 20 mph.  It was difficult finding an RV park that wasn’t full up since it was the 4th of July weekend.  We spent the night in Lubbock until Monday when we were able to find someone who could replace the axle by 4:30 that afternoon.

Eternally grateful to the owner of the axle repair place for making us his last repair before closing for the holiday, we hitched up and prepared to finish the trip…

until I accidentally extended the legs on the camper instead of retracting them once we’d gotten the camper hitched up to the truck.  It appeared that the legs had frozen in place and there might have been damage to the hitch itself.  It became very quiet… except for the prayer that I uttered in sheer desperation.  Junior Deerslayer suggested we try retracting the legs one more time…. and it worked.  God was surely shaking his head and pitying me at that moment.  Many thanks were given.

We arrived at Glendo two days late and pretty haggard.  At least we made it in time to see the fireworks.  Well, as it turned out, the fireworks display had occurred on Sunday.  We missed it.

After four days visiting with friends and family, getting some much needed R & R, and preparing our designated dinners for the group, it was time to pack up and head back to Texas…

after we removed the screw that had lodged itself in the rear passenger-side tire of the truck. 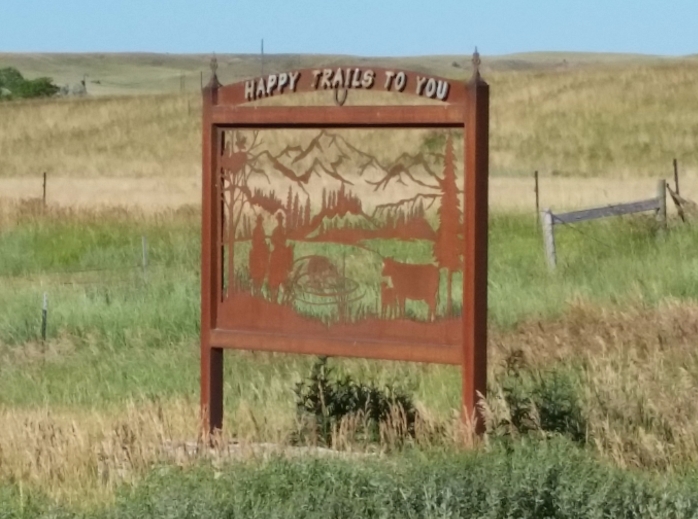 We made it back to South Texas without any problems.  It was good to be home.  It’s entirely possible that God had a hand in this odyssey.  Perhaps by encountering one delay after another we narrowly  escaped a much worse fate.

It’s the eventful trips that make the longest-lasting memories!  Nobody ever sits around a campfire and talks about the trips when nothing exciting happened.

Next year, we’ll have something to talk about.

Have you ever had a camping trip from Hell?  Share.

Category: Camping, Tales from the Hunting CampTags: Camping, preparing a camper for a trip, Yeti coolers