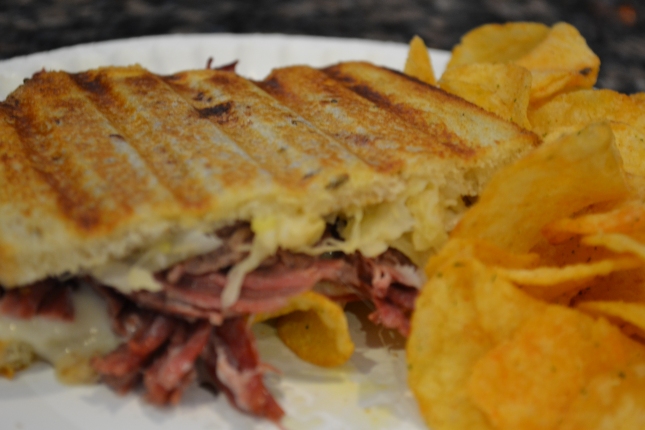 I was so excited when I read Hank Shaw’s post on Corned Venison!  I’m a huge fan of corned beef and a big fan of Hank Shaw, as well.  There are few things better than a corned beef sandwich on rye bread (except perhaps corned venison or corned nilgai) served up like a reuben with saurkraut and beer mustard.

Hank did a very thorough (and beautifully photographed) job of describing the process of making corned venison so I didn’t bother putting my own spin on it except that, this most recent time, I used half of a nilgai roast instead of venison and I threw in a deer heart just to see  how it would turn out. (Really well!)  I’ve prepared the recipe three times now.  The first two times, I used venison football roasts. The recipe turned out great.  Flavorful and tender.

The Instacure I ordered from Amazon Prime.  I followed Hank’s directions to a “t” except that I used brown sugar rather than white for the brine.  I just like brown sugar better as a general rule.  My biggest challenge came when I was looking for a container to place my meat in while it brined.  I settled on a plastic cylindrical container that 4 lbs. of potato salad came in. It sealed nicely and was just the right size for a 1/2 nilgai roast plus a deer heart (just cuz) and could be slid into the back of the fridge.  The same container (after it was thoroughly cleaned) was perfect for storing the cooked meat which needs to be kept in the cooking liquid so it doesn’t dry out. 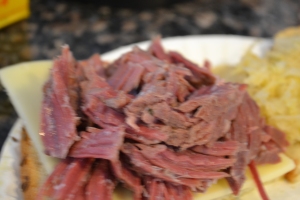 Nilgai is pretty dense, sinewy meat so I punctured it pretty liberally so that the brine could penetrate all the way through.  For the heart, I just cut off about the top ½ inch, rinsed it out well and tossed it into the brine with the other meat.

Our favorite way to eat the corned meat is on a sandwich which has been toasted, panini-style, with my George Foreman Grill. I find the best rye bread that is available in the Rio Grande Valley, slather it with beer mustard, a slice of swiss cheese, and some saurkraut.  I spray the outside of the sandwich with olive oil cooking spray and grill it on the ol’ George Foreman.  The same effect could be accomplished with an actual panini press or in a cast iron skillet.  The result is crisply toasted bread, melty cheese, and fabulous corned meat that I prepared myself for my Deerslayer Clan! 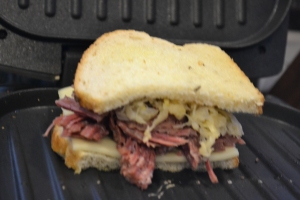 Promise me that you’ll try it!