Posted on November 16, 2014 by thedeerslayerswife 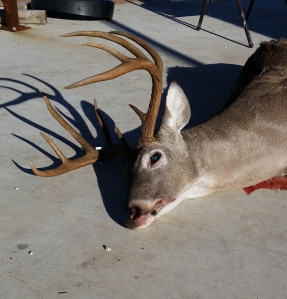 Okay, it was the first day of deer season in South Texas.  For the first time in quite a few years, Deerslayer headed out alone since the girls and I were had a previous commitment.  At daybreak, he scored this very nice ten-point, which weighed in at 185 pounds.

Within the next  24 hours, he added (you better sit down for this!) 6 wild pigs.  There were two pigzillas and 4 succulent, tender, I mean cute, little wild porkers.  What is it they say about too much of a good thing?

It’s important to remember that ranchers in these parts are always grateful to have the feral hogs eradicated from their property.  Wild pigs do lots of damage to crops and land, rooting for grubs and such. 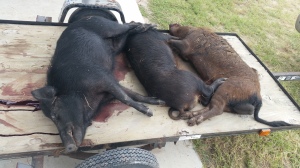 Over the years, as all of you know,  I’ve become a huge fan of wild pork.  The more I use it, the more I appreciate the mild, lean, sweet meat.  The roasts, cook-all-day spicy pork butt and the resulting pulled pork sandwiches, tenderloin, steaks, bbq forequarter, and pan sausage. And don’t forget the fabulous smoked pork shanks!  Nowadays, I couldn’t live without them in beans, split pea soup, etc.   I will always make room in the freezer for some wild pork.  But SIX?

As fate would have it, Deerslayer’s brother was visiting from Dallas that weekend and was lamenting the fact that he had completely depleted his wild game stores.  His freezers were bare!  And with three big, strapping boys, it was a real issue.  Problem solved.  Brother went home with two of the pigs, leaving us with four pigs to process and package up.  Yay!  I say this a little sarcastically.  While I love wild game and thoroughly enjoy experimenting with new recipes, a project such as this monumental task left me a little less than enthusiastic.

Deerslayer (a.k.a. pigslayer)  had a few monumental tasks of his own before he even had a chance to “bring home the bacon”, as it were.  Hee hee

Down in this neck of the woods, these wild pigs have a tendency to have their fair share of ticks and fleas, which makes skinning them pretty unpleasant… unless you enjoy that whole primal ritual of checking each others’ nooks and crannies for the little critters.  I do not.  Neither does Deerslayer or the juniors.  “Necessity is the mother of invention”, ya know.  So Deerslayer created a device that seared the hair off the pigs while providing a pyrotechnics show of sorts.  Using a flamethrower and propane tank,(yeah, baby!) he was able to burn the hair (and any offending fleas and ticks) off the carcasses.  In the picture, you can see the propane tank and the hose that attached to the flamethrower.

Granted, the smell, I’m told, was less than pleasant but the pigs were hair- and critter-free.  A quick squirt with a hose and brush made the process much less worrisome.  The junior pigslayers and I were greatly disappointed that we missed the “show”.  Apparently, it was a sight to behold.  A display of genius!

We excitedly await the next opportunity to head out to the ranch so that I can do a video tutorial on the “flaming pig” process.  Perhaps it will go viral!

9 Comments on “Successful Hunt? You decide!”