Posted on October 10, 2016 by thedeerslayerswife

I take pride in having more whitewing recipes than the average Doveslayer’s wife.  Every dove hunter loves dove breast with a slice of jalapeño and wrapped in bacon and tossed on the grill.  It’s the pretty much the gold standard.  Everybody loves it. When I talk to people about dove recipes, many of them will look around sneakily and almost whisper,”Have you ever tried slipping a jalapeno in the breast, wrapping it with bacon, and grilling it?”

“Yep, I’ve tried it. Yes, it’s a great way to eat doves.  But there just have to be more ways to enjoy these tasty morsels,”I would say to myself.  That’s why I started experimenting with whitewing recipes.

We end up with lots of doves in our freezer every year.  When Deerslayer/Doveslayer goes out for a hunt, he usually comes home with doves that other hunters have given him, probably because most people only have one “go-to” recipe.  I needed more recipes.  So I started with Special Occasion Whitewing Doves with Gravy, which I received from the matriarch of the Deerslayer Clan,  Roasted Corn and Poblano Chowder with Whitewing Breast,and  Chilaquiles Verdes with Dove Breast, both are variations of recipes we’ve enjoyed from favorite restaurants, and  Dove Ravioli in Browned Butter, a concoction of my own design.

As I worked on the ravioli recipe, my daughters were my taste-testers… to the point that I almost ran out of filling for the ravioli!  It was suggested that the ravioli filling would make a fantastic appetizer on crackers or toast… so I tried it.  Huge hit! Try it and let me know how you like it.  There are few recipes out there for dove appetizers.  I think you’ll like this one. 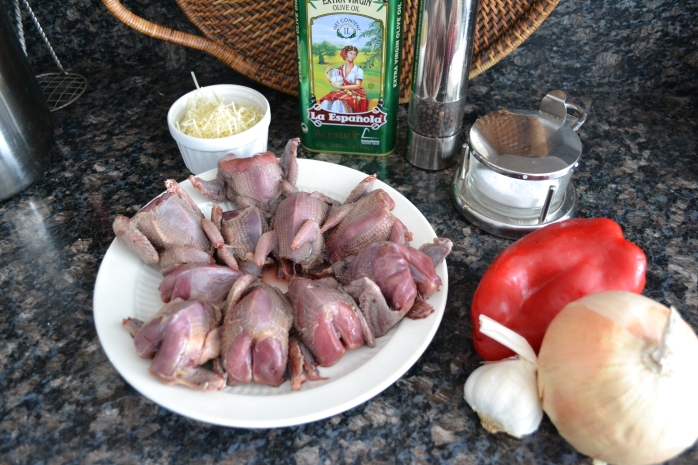 Add in garlic,  dove breasts, chopped red bell pepper (or not), dried thyme, red pepper flakes, and a ¼ cup of white wine. You may need to add some more  wine during the food processing to get a good, spreadable consistency.

Toss about until combined and dove breasts are cooked through, about 7-10 minutes.

You can cut into the dove breast to test for doneness. Remove from heat.

Allow the ingredients to cool before you add the parmesan or it will melt and create a large glob.  You don’t want that.

Transfer mixture to your food processor, in batches if you have a food processorette like I do, and process until everything is finely chopped and holds together. This is when you can add more white wine if the mixture is too dry to be spreadable.

Cover and refrigerate until ready to use.  Serve at room temperature with small toasts. 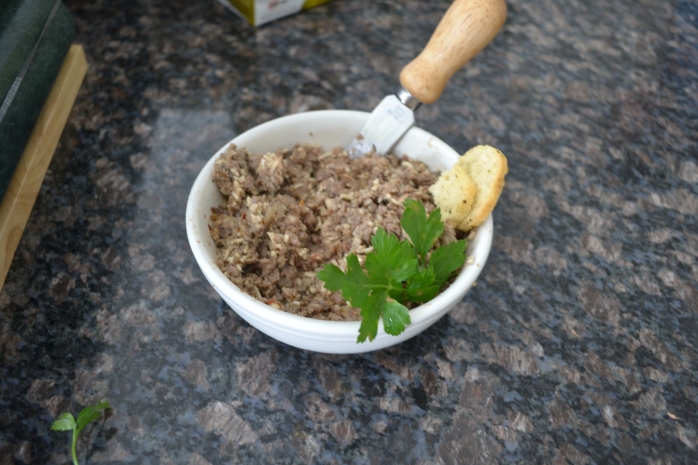